Extracorporeal membrane oxygenation, or ECMO, is a highly-specialized life support system that sits outside of the patient’s body. It provides cardiac and respiratory support to patients whose heart and lungs are not working properly and are unable to sustain life. ECMO is often a last option for patients who have serious lung or heart failure and need intense intervention while treatment options are deployed.

ECMO works similarly to a cardio-pulmonary bypass machine, which is used during open heart surgeries, but its design allows for it to be used for a longer period of time. Typically, patients are on ECMO for a few hours to a few days, but depending on how their condition progresses, they could remain on ECMO for a few weeks.

Deborah Heart and Lung specialists have expert training in the use of ECMO. The hospital remains one of the few centers nationwide with access to this extremely complex life support. 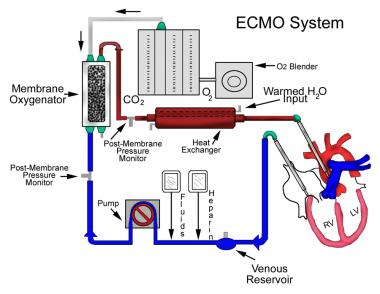 A patient is connected to an ECMO machine with tubing in their veins and arteries. The ECMO machine then pumps blood from the patient’s body to an artificial lung that adds oxygen and removes carbon dioxide (replacing the patient’s own lungs) and then pumps the blood back into the body (replacing the patient’s own heart). An ECMO patient may or may not also be on a ventilator, and may or may not be fully sedated. During the time a patient is on ECMO, they will be closely monitored by a team in the ICU. While the patient’s vitals and oxygen levels are regulated, the Deborah® team will be working on the underlying medical condition that needs treatment.

The goal when a patient is on ECMO is have them removed from the machine as quickly as possible.

ECMO is usually the last resort when other treatments aren’t working. Using ECMO doesn’t cure a patient, but it provides support to the patient’s heart and lungs while they are healing, or other treatment options are being pursued.

ECMO is designed to help patients whose lungs can’t give the body enough oxygen, or whose bodies can’t remove carbon dioxide, or whose hearts can’t pump enough blood, and can include numerous conditions:

ECMO is not usually indicated if a patient has a fatal diagnosis or has a serious other condition like end-stage cancer. The earlier a patient is identified as a potential ECMO candidate, the better the long-term prognosis.