A Second Opinion May Have Saved Ricky's Life 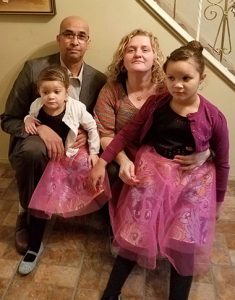 Fifty-four year-old Ricky Millette of Tinton Falls had experienced chest pains for about ten years. Despite this, he was in good shape and was able to keep up with his children. He did have his pains checked out a few times at the ER and also with a cardiologist.

“I kept getting normal echo, EKG, and nuclear stress test results,” he recalls. “I kept being told it was muscle pain.”

In November, however, that changed. “I had an episode again. I was admitted for observation. My brother-in-law reminded me to tell them about my family history of high blood pressure and high cholesterol and to take this seriously. After another round of testing, two blockages were found. I was shocked.”

Ricky then was scheduled for a catheterization. He assumed he’d receive stents to clear the blockages.

“I was told that I couldn’t have stents because of the location. The doctor then told me that I’d need bypass surgery when I got older. I couldn’t believe it! Once again my brother-in-law gave me good advice: He insisted I go to Deborah for a second opinion.”

Ricky had his films sent to Deborah Heart and Lung Center for review by Richard Kovach, MD, and Paul Burns, MD, who respectively head up Deborah’s Interventional and Surgery Programs.

“Right away I heard back,” he says. “Dr. Burns sent me his phone number to speak to us. He told me that this was a significant blockage that could not wait. He explained that this was in the main part of the heart, and can cause a heart attack. It is called the ‘widow maker.’”

“After worrying and not knowing what was wrong with me, I followed his recommendation and scheduled a double-bypass.”

Ricky quickly recovered from his successful surgery in February.

“I thank Deborah and Dr. Burns every day for everything! The hospital was truly amazing, and they made me feel like I was at home.”

“I cannot tell people enough: You need to always listen to your body. And always get that second opinion! I really feel God put Dr. Burns in our lives to save me, and if I hadn’t made that call to Deborah, I might not be here today!”