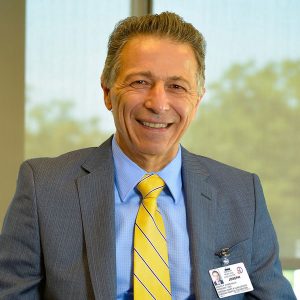 President and CEO, Joseph Chirichella, of Mount Laurel has been at Deborah for 40 years. Prior to advancing to his present role as President and CEO in 2010, Mr. Chirichella held various positions during his tenure at Deborah, including the handling of day-to-day operations of the Center as Vice-President of Operations. He has also served as Assistant Administrator, Director of Materials Management, and an Administrative Resident. He additionally served for several years as Interim Chief Operating Officer of the Deborah Hospital Foundation. He holds an MBA from Wagner College, and a BA from Villanova University.

Among Mr. Chirichella’s achievements, he has played a pivotal role in developing several affiliations and joint ventures. In 2019, Deborah Heart and Lung Center became an affiliate of the Cleveland Clinic Heart, Vascular, and Thoracic Institute. Cleveland Clinic is ranked #1 in the nation for heart care since 1995 by U.S. News & World Report. Mr. Chirichella was recently recognized as a driving force behind the business in South Jersey Biz magazine. Currently, key relationships include the Capital Health Emergency Department at Deborah, as well as a partnership with Cooper University Health Care known as HeroCare Connect™, which provides vital medical services to active duty military personnel and veterans. Deborah is dedicated to expanding its role in the community to address the underserved medical needs of the residents of eastern Burlington County and Joint Base McGuire/Dix/Lakehurst.