It is estimated that 22 million Americans suffer from obstructive sleep apnea (OSA), a condition where the airway collapses during sleep and blocks the flow of oxygen to the brain. When that happens, the brain senses the lack of oxygen, wakes you up 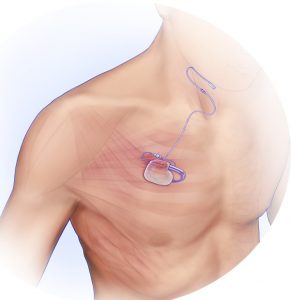 to take a breath, and then you fall back to sleep. This repeating cycle throughout the night causes poor, interrupted sleep.

The gold standard for treating OSA is a CPAP (or continuous positive airway pressure) machine which is worn at night. But for 40% of those diagnosed with OSA, for various reasons, whether it be the face mask, the pressure, or the tubing, they can’t tolerate CPAP.

For these patients, there is another treatment option – called Inspire — a small, FDA-approved implanted device that works with a patient’s natural breathing process to treat sleep apnea.  The small, pacemaker-sized device is implanted by an Ear, Nose, and Throat doctor during an outpatient procedure. Once implanted the patient can turn the device on and off with a remote control. Mild stimulation to the tongue allows the airway to remain open during sleep, keeping oxygen flowing naturally. Patients can hit pause on the remote if they have to get up to use the bathroom or get a drink during the night.

The team at Deborah’s Institute of Sleep Medicine can discuss Inspire, as well as other treatment options, for your obstructive sleep apnea.

Deborah Heart and Lung Center in Browns Mills, NJ is an 89-bed teaching hospital that specializes in the prevention, diagnosis, research, and treatment of heart, lung, and vascular diseases. Founded in 1922, Deborah has been a regional and nationally recognized leader throughout its 100-year history, during which time it has healed 2.3 million patients from every corner of the United States and 87 countries in the world. From performing the first open heart surgeries (adult and pediatric) in New Jersey, to running one of the highest volume left-ventricular assist device (LVAD) implant programs in the region, Deborah has stood at the forefront of medical innovation, all while never wavering from its founding mission “there is no price on life.” Deborah is consistently recognized as a leader in patient care from the Centers for Medicare and Medicaid Services, ranked among the top hospitals in New Jersey for patient satisfaction; holds a top-tier Society of Thoracic Surgeons rating which places Deborah among the best cardiac surgery programs in the country; and is designated a national Top Teaching Hospital by The Leapfrog Group. Deborah is an Alliance member of the Cleveland Clinic Heart, Vascular & Thoracic Institute.